Visit some of my friends:

Colleen
I am just a girl who's really in love with Jesus! Dedicating my life to serve the poor and the needy, the ones who others find it hard to love and the people God places in my path! I am excited you've decided to come to my blog and share this journey with me, it'll be my personal, spiritual and work related journey, so grab yourself a cup of tea and get comfy, because a journey it will be. 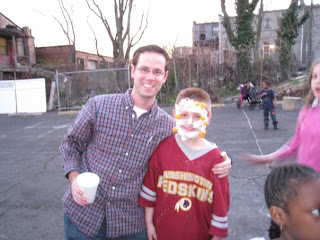 Wow, where do I even begin, Bryan (and his wife) is one of the first people outside of my group of friends to step out and tell me that he (they) supported what I'm doing. I will never forget the first night I met Bryan, my life was changed. Originally he and his wife Melissa, agreed that they were going to support me a specific amount of money over the next year to year and a half, little did they know when we sat in the Starbucks on Dobbin Road, they were in it for the long haul!

A few weeks after our initial meeting Bryan and Melissa joined us on a Wednesday night, it was probably one of the more chaotic nights and just like I got tossed in right away, so did they, honestly I wasn't sure that they'd be back after that night. Much to my surprise, the very next week there they were! This was nearly a year and a half ago. Now he's a dedicated Metrokidz volunteer and official member of Charm City Church, serving in many leadership positions.

It has been with much joy that I have watched Bryan take a class full or wild, angry, but lovable group of young boys under his wing. The changes that have taken place in these boys is phenomenal. I had the opportunity to work with Bryan for a few months during a transition period and all I can say is WOW. Even on nights when the boys were "tuned out" they still walked away with something. A few months ago, Bryan probed his boys for things they had learned over the past year, and they listed every single last thing that he's taught them. His commitment to his boys is something to be modeled, every child gets a birthday gift, every child is prayed up and finally every boy who walks into his life, despite their faults, knows that they are loved and cared for without boundaries. Bryan is one in a million and I am so grateful to call him friend, and brother in Christ.

Bryan says his favorite part of MetroKidz is, "is seeing real long-term progress despite weekly set backs. For example, Jo and J were so angry when I first met them over a year-and-a-half ago. Now, they are reading their bibles, asking tough questions, and thinking about what they want to do when they grow up. On a week-to-week basis, it seems sometimes like no one is paying attention. Yet, when you start to ask them about the things they have learned over the past year, they remember all of it! Truly amazing. "

Outside of MetroKidz Bryan loves hanging out with his wife Melissa, spending time hiking, reading and taking photos. Bryan is also an avid Miami Dolphins fan and Syracuse Orange fan.

How we can pray for Bryan:
His prayer for his boys is that they can start to apply what they learn to their lives as opposed to just having the head knowledge.

He would like for God to continue to mold him into a man that is less dependent on self and more on Him.

Photo: Bryan and one of his boys at last years Spring Fling.
Posted by Colleen at 9:15 PM No comments: